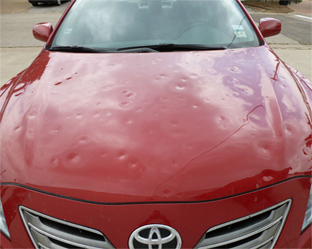 Paintless Dent Repair was started in 1931 by Frank T. Sargent. At the 1960 International Motor Sports Show in New York City, Oskar Flaig made the first display of PDR. At the time he worked for Mercedes-Benz as a painter. In the evenings after the cars were presented, his job was to fill in any dents and repaint the vehicles to new. He pushed out the dents and made the vehicles look like new without the filler. After this show, Oskar Flaig flew back to Germany and began to develop the techniques and tools for paintless dent repair. Flaig was eventually promoted to foreman at the Mercedes Sindelfigen plant where he was known as the “golden tinsmith” and started training programs that are still taught to this day.

Why use PDR? It is certainly convenient. We can come to you, and in most cases we will get the work done in the same day. PDR is usually covered by insurance so be sure to contact them to verify it is on your policy and schedule an appraisal. Have the pertinent information ready that will needed for the insurance company such as where the damage occured, what part of the vehicle the damage occurred and make sure you get a claim number. Hail damage can be fixed with PDR as long as there is no paint damage, however, it may take more time and you will likely need a rental car depending on how bad the damage is.

Want to join the discussion?
Feel free to contribute!

Storms and How They Can Impact Your Car
Scroll to top